News from the Boardroom

OCSB Chair and Vice-Chair Acclaimed for Another Year 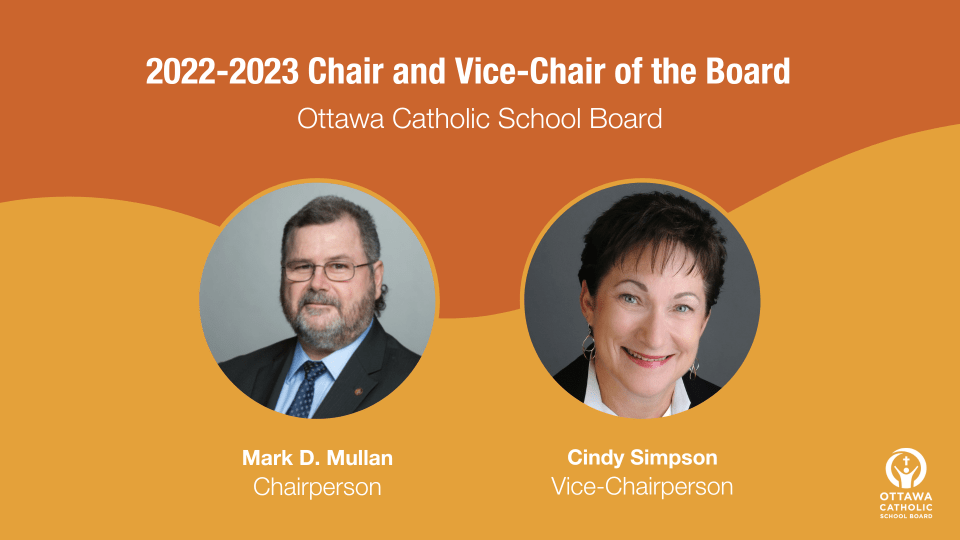 Trustee Mark D. Mullan who represents Zone 8, Alta Vista/Gloucester Southgate, was acclaimed Chair of the Ottawa Catholic School Board on Tuesday evening. Trustee Mullan is in his 26th year of serving Catholic students. He is entering his eighth term as Chair of the Board.

Trustee Cindy Simpson was also acclaimed. She will take on the role of Vice-Chair. Ms. Simpson represents Zone 10, which includes Rideau-Vanier-Rockliffe/Somerset. This is Ms. Simpson’s second term of office. She spent four decades working in Catholic education and supporting youth engagement before becoming a Trustee. She brings her experience as a retired Principal and former executive Director of the Youville Centre to her role as Vice-Chairperson of the Board.

Chair Mullan thanked his fellow trustees for “Putting their faith in my leadership again. It is an honour and a privilege to serve the students, staff and families of the Ottawa Catholic School Board.”

He added as we enter 2023, OCSB schools will continue to promote faith development, innovation, academic excellence and student and staff well-being. As the OCSB Board Chair, Mark promotes faith at the heart of everything OCSB does. His leadership is inspired and led by Catholic values.

Vice-Chair Simpsom said, “She had the honour of working with a group of dedicated trustees for the past four years, and she is confident that the sense of collaboration and fellowship will continue to grow.” Ms. Simpson thanked her fellow Trustees for their confidence in her leadership.

Cindy added that she had witnessed first-hand the ingenuity and resourcefulness of staff and our students’ flexible and creative adaptability. She is honoured to work on behalf of Catholic education for all students, their families and OCSB staff.

OCSB’s Board of Trustees consists of ten trustees and two student trustees.

International Education Week: The enriching experience for our communities