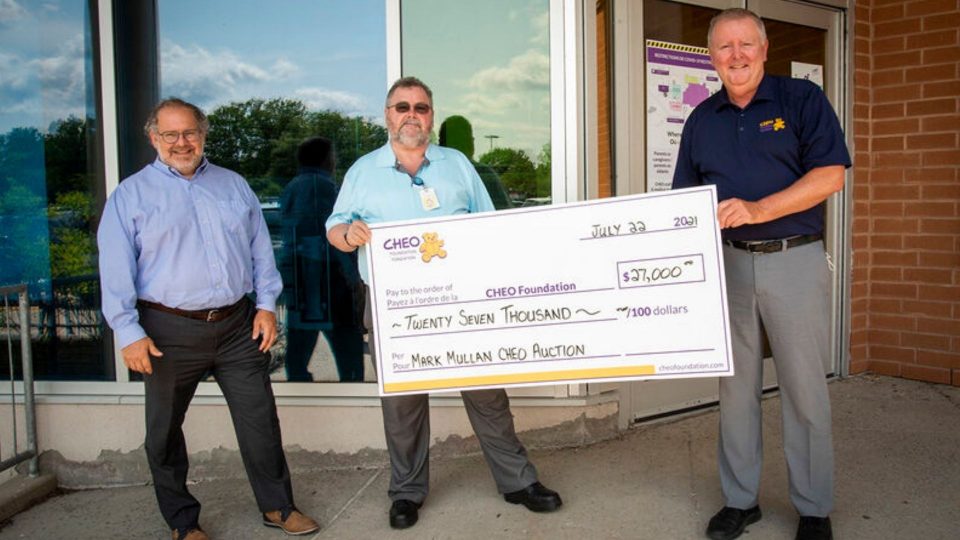 Like many of our OCSB Trustees, Board Chair Mark Mullan has a day job. Mark is a Customer Connections Field Representative for Enbridge Gas. But Mark also has a third “job” to which he devotes about 500 hours every year as a volunteer fundraiser for the Children’s Hospital of Eastern Ontario (CHEO) Foundation. This year, in recognition of his dedication and years of service to CHEO, Enbridge has recognized Mark with their Employee Volunteer of the Year award.

In August 1991, Mark’s youngest daughter, Morgan, was born prematurely and spent 28 days in CHEO’s Neonatal Intensive Care Unit. When he learned the cost of care was $10,000 per day,  he set a personal goal to raise $280,000 for CHEO so that another child could have the same chance at life as Morgan. Since 1995, Mark has coordinated fundraising silent auctions and raffles for CHEO and has led Enbridge’s local fundraising for the hospital’s foundation. This is his 25th year conducting silent auctions for CHEO with the support of Enbridge and its suppliers and customers.

This is the third time Mark has received Engbridge’s Employee Volunteer of the Year award. He was also recognized in 2002 and 2014. This year’s award also included a $5,000 donation from Enbridge to CHEO, bringing Mark’s total amount raised since 1995 to $524,000! Mark is grateful for the support of his Enbridge colleagues and customers and all the OCSB staff who contributed and bid on items in his CHEO Auctions throughout the years. The OCSB is proud to congratulate Mark on this award. His leadership and achievements embody the OCSB commitment to Be Community.

It's time to register!

Have questions about the Student Census?

We have put together an FAQ to answer all your questions surrounding the Student Census.

The Ottawa Catholic School Board Copyright © 2021.